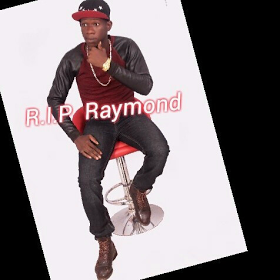 Only if he had known that, friday 22nd would be his last day on earth he would have chosen a different fate to avoid death.
This was how Raymond Chukwuenuka Ezirim was shot dead at Great star hostel, front gate students area of Imo State University. Raymond
Chukwuebuka Ezirim who will be
buried today, 27th May, 2015, was
reportedly shot dead while he and some other students were discussing at the front of Great Star hostel around 7:30pm when some armed men accosted them. The men (who were said to have identified themselves as “Black axe” cultists)
ordered everyone to lie
down and then asked for the members
of “Bargars” (another cult name). According to info gathered from MYIMSU.COM The surrounded students said they didn’t
belong to any cult but the “Black axe” men shot two male students. One of them was Raymond who died from the gunshot while the other called Joshua is still undergoing treatment in the hospital.

This narration came from an
eyewitness who was among those who were accosted (name withheld for security reasons).
Meanwhile Raymond Ezirim, the dead student will be buried today, Thursday 27th May, 2015.
He is 200 level student of English and Literary studies
Who hails from Ibeme Amaise autonomous community in Isiala Mbano LGA. 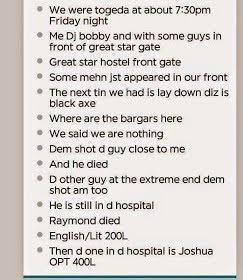 2 Replies to “How 21 year old IMSU Star was murdered in Cold blood in front of his hostel.”