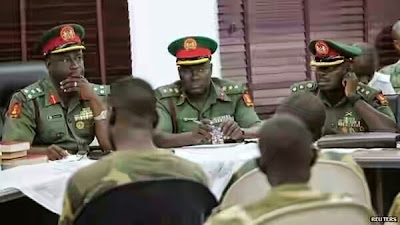 The Nigeria Army on Tuesday at the Rukuba Barracks in Jos, Plateau State, dismissed about 200 soldiers from service for their failure to capture the Sambisa forest – a notorious hideout for Boko Haram terrorists in Borno State.

They were dismissed for laxity and cowardice in the course of duty.

One of the affected soldiers, Aguloye Sunday, an indigene of Ondo state, who confirmed the dismissal to journalists in Jos, said they were arraigned on a two-count charge over “failure to
perform military duty and disobedience to standing order.”

He however said the charges pressed against him and his colleagues were “untrue, false and malicious,” and said they would seek redress in court.

Premium Times reports that Mr. Sunday denied the claim by the army authorities that the soldiers abandoned their duties and ran away, explaining that sufficient weapons were not provided for them to fight the terrorists and therefore they soon ran out of weapons.
He also said the weapons provided for the troops were obsolete.
“The bombs given to us were made since 1964 they were expired, so we could not use them,” he said.
“Each of us were given five bullets, not five rounds to fire, while in the forest, our biggest weapon was to cover just a distance on 400 meters, but our enemy had aircraft weapons that could cover a distance of more than 1000 meters with other dangerous weapons. We only retreated to our base, waiting for ammunition for three days in vain.”
Mr. Sunday explained that the soldiers were earlier imprisoned for 28 days with hard labour by one Lt. Colonel Gambo, before a general court martial was set up by the Nigerian army to try them.
He added that Mr. Gambo had also been ordered into the guardroom – a military cell- for issuing mild sanctions against the soldiers.
He said:
“As we speak, Lt Colonel Gambo was yesterday kept in a guardroom at the officers mess, because he sentenced us to just Imprisonment and Hard Labour, we had served the punishment for a week before the dismissal order; some of our senior men were demoted before the dismissal,” the soldier said.
Mr. Sunday said since November 13, 2014, when authorities withdrew him and the other soldiers them from the notorious forest, they had been subjected to untold hardship. He also disclosed that they are also being owed 10 months salaries and allowances by the Nigerian Army.
“We have been sleeping in the open at the barrack since we left the forest November 13th without food, but we have been ‘falling in’ for duties each day at the barracks,” he said.
The army did not respond directly to Mr. Sunday’s claims.

The army spokesperson, Sani Usman, told PREMIUM TIMES that most of the stories being peddled as well as the figures of the number soldiers dismissed, are inaccurate. Mr. Usman, a colonel, warned that the army would not tolerate any act of indiscipline, cowardice or desertion from any of its personnel.
“Most of those that abandoned locations at the approach of the terrorists did not join the Army to fight,” Mr. Usman said.
“The issue of lack of equipment or weapons is baseless as there has never been a time when the Boko Haram Terrorists were better equipped or armed than the Nigerian Army.”
He also said disciplinary processes in the army involves thorough investigations, fair hearing and impartial dispensation of justice.