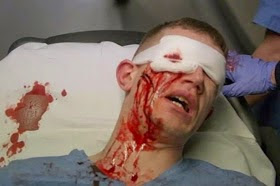 AN ice addict in a hospital emergency department gouged out his own eyeballs and ate them, a Federal Liberal MP has revealed.

The horrific story was revealed yesterday at an Ice Summit on the Central Coast organised by the Express Advocate to address the epidemic in the region.

Dobell Federal Liberal MP Karen McNamara relayed the story as she opened the summit before a packed auditorium this morning.

“There is nothing at all recreational about this drug,” Ms McNamara said.
“Let me tell you a story that demonstrates this … about a young boy taken into an emergency department for treatment who gouged out his own eyeballs and ate them,” she said.
“We have to get these kinds of stories out to young people — this is not a recreational drug,” she said.

A spokeswoman for Ms McNamara later said the incident occurred at John Hunter Hospital at Newcastle and that she was in the room when the story was related to Ms McNamara by a frontline emergency services officer who wished to remain anonymous.