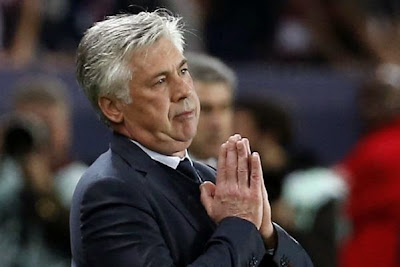 According to reports on Yahoo! sports, Real Madrid Manager; Ancelotti is set to be sacked after having endured a
difficult second season at the club,
having won the club’s 10th Champions League – La Decima – in 2014, but failing to win La Liga in either year.

Club president Florentino Perez has
reacted by reportedly lining up Rafael Benitez, Napoli’s current manager, as Ancelotti’s replacement amid growing speculation that he could be sacked.
Ancelotti has been repeatedly linked
with a return to AC Milan – and he has admitted, “I’ve always said and thought that if one day I return to coach a club in Italy, I could only do it with Milan”…but Carlo Ancelotti deals a blow to Milan, confirming he’ll ‘stop for a year’ if he’s sacked by Real Madrid, as he needs
surgery, saying…
“I said it at the press conference, and I can only repeat it – I’ll stop for a year. I also have a very serious reason to stop, I need to have an operation for cervical stenosis [a spinal condition].
“For some time I’ve been having tingling in my hands, if I wait any longer it m spread to my legs, so I’ve made an
appointment for surgery.
“Frankly I don’t know how long I’ll have to physically stop, for the postoperative phase and subsequent rehabilitation.
But he has now confirmed that he would take a year out to recover from an
operation on his spine if he is eventually sacked at the Bernabeu, despite
Rossoneri CEO Adriano Galliani having reportedly travelled to meet with him in Madrid.