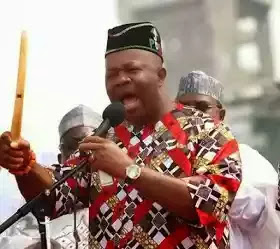 Protesters have locked down the Akwa Ibom Liaison office in Abuja over alleged failure by Governor Godswill Akpabio to fulfil his promise to pay each staff N50,000 for travelling home state to vote for the Peoples Democratic Party in the recent general elections.

Staff say the governor also promised to pay them generous Christmas bonus for 2014 but has so far failed to keep his words.

According to reports by Premium Times: Mr. Akpabio promised them general financial incentive if they could travel to Akwa Ibom from the Abuja base to vote for his anointed candidate in the governorship election.

The offer was irresistible to many staff who travelled the over 634 kilometres by road to vote for the state PDP governorship candidate.

But over a month since they returned, the staff said, Mr. Akpabio has failed to pay up.

After pressuring him quietly for weeks, the staff ran out of patience and embarked on a protest Monday to compel the governor to pay before handing over to his successor on Friday.