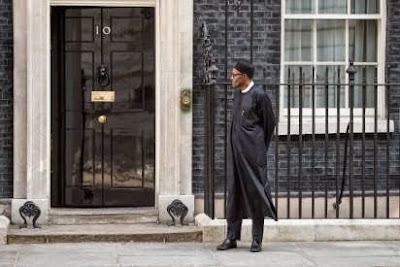 President-elect Muhammadu Buhari, currently on a private visit to England, on Friday turned down the use of a Rolls Royce made available for him by the Nigerian High Commission in London.
Buhari shocked officials of the High
Commission when, on landing at the Heathrow Airport, he declined to make use of the Rolls Royce and other facilities offered him.

The Nation reports that after exchanging pleasantries with the embassy officials led by the High Commissioner, Dr Dalhatu Tafida, the president-elect politely told them that his visit was strictly private and he had made
arrangement for all his needs while in the UK. He reportedly thanked them for the warm reception and quickly hopped into a less flamboyant car he had arranged for and drove out of the airport.
A source said:

“It appeared he was uncomfortable with the number of exotic cars in the convoy. Hard as the stunned diplomats present
tried to convince him, he refused to
bulge, insisting that since he did not
inform the Commission of his visit
because it was not an official trip, hence he was not entitled to such grandeur.”

Buhari, yesterday, held talks with British Prime Minister David Cameron at his 10, Downing Street official residence. Top of their discussion was the continued threat to Nigeria’s security by the terror group, Boko Haram.