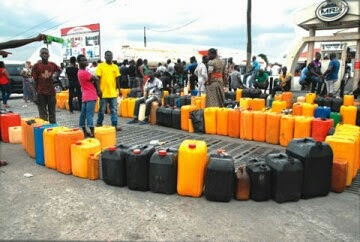 There are indications that the current fuel scarcity may not abate unless the Federal Government pays the outstanding N200m reportedly being owed the oil marketers as subsidy claims.

The oil marketers, who confirmed to Punch correspondent that they had stopped importation, said they could not continue with fuel importation as result of inadequate funds.

Olawore, along with the Nigeria Union of Petroleum and Natural Gas Workers, also denied the report that they were on strike.

He said they were still waiting for the Federal Government to call them to another roundtable on how to pay the N200bn fuel subsidy owed them.

Olawore said, “We are not on strike. People are just painting us the way they want. We are not importing because we don’t have the money to buy the products. The government has not invited us. The only thing we have heard is the resolution of the Senate on Thursday and I think that they are going to invite us soon.”

Out of N356.2bn subsidy the government reportedly owed oil marketers, the Ministry of Finance paid the sum of N156bn about two weeks ago.

With about five days to the handover of power to a new administration at the federal level, tanker drivers in the country have also stopped lifting fuel from the depots, leaving many filling stations without the product and others selling at exorbitant prices.

The General Secretary, NUPENG, Mr. Isaac Aberare, said tankers drivers would start lifting the product as soon as they received the directive to do so, insisting that they were not strike.

In its response to the lingering fuel scarcity in the country, the Senate on Thursday directed its Committee on Petroleum Resources (upstream and downstream) to commence a full investigation into the causes of the persistent fuel crisis.

The directive was made following a motion by the Deputy Senate Majority Leader, Senator Abdul Ningi.

“By planning and talking about it, we are now sensitising Nigerians to brace for the impending issue of fuel scarcity whether it is going to be here permanently or it is temporary.”