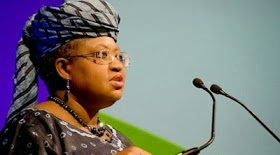 Coordinating Minister for the Economy (CME) and Minister of Finance, Dr. Ngozi Okonjo-Iweala, on Saturday put the nation’s total debt stock at $63.7 billion, which encompasses multilateral as well as domestic loans by successive federal and state governments since 1960.

Speaking during an interactive session with finance correspondents in Abuja on Saturday, she said it was wrong to blame the Jonathan administration for the huge debt stock which she said was
accumulated over a long period of time by several administrations.

Giving insight into the $21.8 billion debts incurred under the Jonathan government the minister said the debts were made up of $18 billion domestic component and $3.7 billion external component.

She explained that the leap in the debt profile between 2012 and 2015 was triggered off by the 53
per cent wage increase implemented by the late Umaru Yar’Adua administration in a fell swoop.

This, she said, skyrocketed government’s borrowing from N524 billion to over N1 trillion in order to meet the salary increase, adding that the country’s domestic debt increased by $18.1 billion mainly
because of the 53 per cent increase in the pay of civil and public servants.

The minister stated that at the time of the salary increase, she was still with the World Bank, adding
that she had written and warned on the consequences of acquiescing to such a huge increase.

Absolving the Jonathan administration of blame, the minister said the government had in deed taken a careful and meticulous approach to managing the nation’s debt, noting that the present administration, for the first time in the nation’s history, retired a domestic debt of N75 billion in 2013.