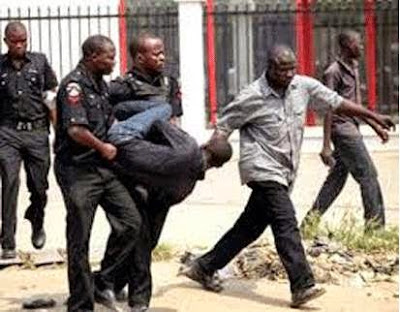 The Oyo State Police Command arrested a suspected member of a robbery gang on his wedding day. Olumide Asiyanbi, 42, told newsmen that nemesis caught up with him when he was at the registry to sign the dotted lines.

He also confessed that he had been involved in 10 different robbery attacks before he was arrested. He said:
“I was arrested on my wedding day. I
met the gang leader, James Agba, last year.
He told me he knew how we could
be getting regular money. He then
initiated me into the gang. I have taken part in at least 10 operations since I joined them.

We used guns but I don’t know where James was buying them. Sulaimon and Alhaji, who are also in the gang, knewhow the guns were bought for our operations. I have fired shots at our targets but nobody was killed.”

The police alleged Asiyanbi was a member of a six-man-robbery gang who had terrorised residents of Challenge area of Ibadan, the state capital. The state Commissioner of Police, Muhammed Katsina, said the suspects included
a 62-year-old Ghanaian.

2 Replies to “BAD MARKET: How a robbery suspect was arrested on his wedding day .”