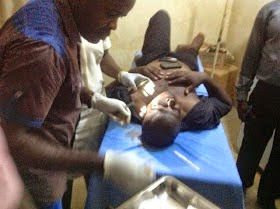 No fewer than six persons, including four Anglican priests, were on Friday allegedly beaten to stupor by some members a task-force working with the Enugu State Housing Corporation. The victims were Reverends Collins Odoabuchi, Mbaka Peter, Eugene, and Maxwell Onyia.
Others members of the church affected were Ekpecha Okechukwu and Naomi Ibekwe.

The development, which is building up tension in Enugu, the state capital is coming one week to the end of Governor Sullivan Chime’s administration.

Saturday Vanguard gathered that trouble started when members of the task force, accompanied by armed policemen, invaded a parcel of land belonging to the Christ Church, Uwani, Anglican
Communion, sparking off anger from both clergymen and members of the church.

The Clerics were said to have tried to stop the Task force from carrying out the demolition exercise but were over powered by the government agents, who allegedly unleashed terror on the church leaders.

One of the victims, who gave her name as Naomi Ibekwe told journalists that she was hit with iron and hard objects, including stones, causing bruises and severe injuries on her.

But for the quick intervention of the State Commissioner of Police, Muhammed Abubakar Adamu, who came physically to the scene, there would have been more casualties as the members of the task force insisted on going ahead with the exercise as allegedly directed by the state government.

Reacting to the incident, the State Commissioner of Police, Adamu Mohammed, told the angry church leaders and their faithful that they should allow peace to reign as negotiation had begun.
“We have discussed with the church. If anybody is injured, we will not take it lightly. We have already asked that a formal report be made and we will follow it up. We have agreed on a peace move and we are following it up”, he stated.
Also speaking, the Priest in-charge of the Christ Church, Venerable N. Aghadi said,

“We have talked at length and discussed very progressively. The Commissioner of Police is pleading that we should go home and rest. He has promised that the matter is in good hands and that immediately the Archbishop returns, he will have meeting with him”.
However, a source told Saturday Sun that the state government revoked the land with an intention to build an estate christened “Transparency Estate”. While the clash lasted on Friday, five bulldozers were being used to demolish the structures at the disputed land inside the church premises.

Findings by Saturday Vanguard showed that the Church was dedicated by His Grace, the Most Reverend C . J. Patterson, the then ArchBishop of West Africa and Bishop of the Niger in 1965.
Meanwhile, it was learnt that the Managing Director of the Enugu State Housing Corporation, Emeka Vitalis Onah, who led his team to the place, escaped being lynched by church members who had planned a reprisal attack.