A new dimension has crept into the current struggle to wrest the governorshipl election victory from Governor Rochas Okorocha of the All Progressives Congress, APC.

The petitioners, Mr. Nnadi and his party, APA, claimed, that the total number of votes cast in most polling units, particularly Ideato North, Ideato South, Aboh Mbaise, Oru East, Orsu, Obowo, Mbaitoli, Ikeduru, Okigwe, Nkwerre, Nwangele and Njaba local government areas of Imo State, were greater than the total number of registered voters, who collected their PVCs and the total number of accredited voters in the areas in question.

The petitioner also averred that the election was invalid as a result of corrupt practices and non-compliance with the Electoral Act.

According to the petitioner, the governorship election of April 11, 2015, and the supplementary election of April 25, 2015, were marred and vitiated by substantial non-compliance with statutory requirements, irregularities, corrupt practices, fraud, illegal voting and mutilation of election result sheets that substantially affected them.

He said none of the candidates was entitled to be declared winner of the election, and that the exercise should have been nullified.

Nnadi also claimed that there were cases of ballot box snatching, illegal voting and snatching of election result sheets by thugs/agents of the first and second respondents, Governor Rochas Okorocha and APC, respectively.

The petitioner also accused the governor and his agents of indulging in illegal buying and selling of PVCs, through which they allegedly induced and procured illegal and unlawful votes across the state, contrary to the provisions of the Electoral Act.
Vanguard recalls that at the last count, no fewer than three cases had been filed in the tribunal, challenging the victory of Okorocha. 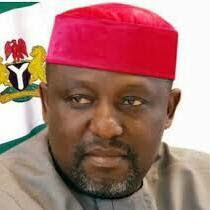