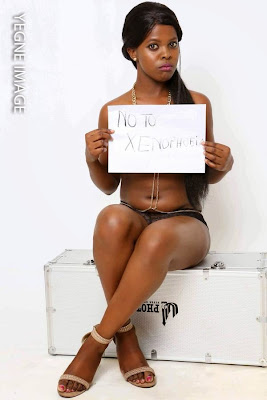 Upcoming South African actress and model, Noluvuyo Sodela, better known as Bubbly Bling has done the unimaginable to campaign against the recent xenophobic attacks on immigrants which happened in South Africa early last month. Sodela, who refers to herself as an anti- xenophobia activist, took to her Twitter account to post a picture of herself, holding a ‘No to xenophobia’ inscription.

Noluvuyo Sodela has acted in SABC 1 drama Ihawu Lesizwe has also appeared in a few Mzansi Magic movies that will be seen in upcoming eTV Ekasi.