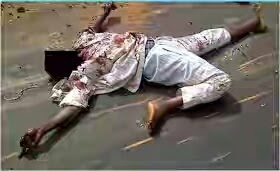 A security man, simply identified as Thompson, has died after drinking a bottle of a popular alcoholic drink and smoking five sticks of cigarette in two minutes, which were the terms of a bet he entered into with others he met at a joint.

The incident happened at Agege area of Lagos on May 7, after the deceased bought bottles of Ogogoro (local gin) for his drinking companions, who then challenged him to finish a bottle of bitters and smoke five sticks of cigarette within a stipulated time.

If he had won, the friends would have paid for everything he consumed.

According to Vanguard: After agreeing to the terms, the deceased opened the bottle of bitters, drank it in less than two minutes, smoked two sticks of cigarette, stood up and began to walk away.

His friend, 28-year-old Earnest Joseph, who had gone out with him said: “At about 8am, Thompson returned from his security guard job, went inside his room and slept.

“Later in the afternoon, two of his friends came. So I prepared Eba because he had soup and we all ate. We went out to a nearby local hot drink vendor, popularly called Tee Sugar. Thompson bought N50 quantity of Dongoyaro and N30 sachet of Chelsea for each of us.

“From there we went to another vendor in the neighbourhood and met some of Thompson’s friends from his home town. He ordered for two full bottles of local gin, Ogogoro, which we drank together.

“As soon as we finished consuming the first bottle, Thompson and his relatives began to speak their local dialect, which I do not understand.

“All of a sudden, the vendor brought a big bottle of bitters. I asked Thompson if he was the one that ordered for the bottle. He said his friends ordered it and that he wants to prove to them that he can drink a bottle of Alomo Bitters and five sticks of cigarettes.

“I tried to stop him but he drank it in less than two minutes, smoked two sticks of cigarette and decided to leave. His relatives called him back to smoke the remaining three.”

He said trouble started as soon as he finished the fifth stick.

He reportedly became uncomfortable, staggering, sweating profusely and breathing heavily as he walked away.

Joseph said he took Thompson home on okada. He was said to have vomited several times and then died at about 8p.m. in his room.