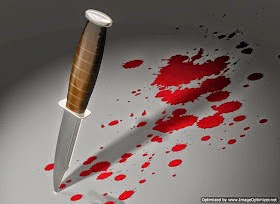 Tragedy struck yesterday in Ubomiri community of Mbaitoli LGA of Imo State after a 20-year-old secondary school girl allegedly stabbed her boyfriend to death with a kitchen knife. It was gathered that the girl identified as Chisom Anyanwu, who hails from Umuawumi Ubomiri, murdered her 28-year-old lover simply identified as Abio, an undergraduate, in cold blood yesterday following an argument between the two.

Abio, a native of Egbeada in the same Mbaitoli Local Government Area, was said to have visited Chisom’s house late on Tuesday, and she became very angry as she had earlier cautioned the boy not to visit her at home, as she would not like her elder brothers and sisters to see him. Abio, who was said to be the only son of his parents refused to go back when he was asked to do so, thus provoking an argument which resulted in Chisom stabbing the boy in the chest.

According to an eye witness, too much blood gushed out of Abio’s body and he gave up the ghost on his way to the Christian Medical Centre, Nworieubi, in the council area and doctors clinically confirmed him dead.

The Nation reports that their effort to meet the medical director of the centre, Dr, Obinna Ozims, for comment on the incident failed as he was said to be busy attending to patients. Meanwhile, the news of Abio’s death which filtered into the neighbourhood caused revolt among some angry youths, friends and relations which resulted in the burning down the house of the parents of the accused. But the police intervened to stop them from further destruction.

Imo state Police Command Public Relation Officer, PPRO, Andrew Enwerem (DSP), confirmed the incident, saying the suspect has already been arrested. “She is in police custody, while investigation is on,” he said.