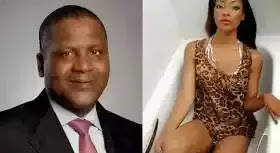 This was the story of Sylvia nduka former miss Nigeria who decided to blow the trumpet when she shouldn’t have.

According to info obtained from lailasblog

Earlier this week, the internet was agog with reports that former beauty queen Sylvia Nduka, was gearing up to get hitched to Africa’s richest man, billionaire Aliko Dangote.

The reports are true as Sylvia was actually a share holder in Dangote’s Harem. She travels to any country in the world on his luxury private jet. Gets pampered in some of the most exotic hotels and locations in the world. pricey designer labels (bags, shoes, clothes), good measures, pressed down, shaken together and running over, was what Dangote poured into her laps and her closet!

When she realized that the hussle was tougher than she thought, She changed her dressing to wearing Hijabs and Burqua even though she hates covering up the Islamic way. But becoming Mrs Dangote no be beans so she embraced hijabs and was seen a few weeks back sweating profusely at a function yet she kept the hussle on all in a bid to con Aliko into dumping others and wifing her up. When that didnt work, she consulted her beauty queen BFF and the planning went deeper
. 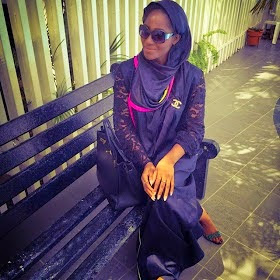 Sensing that the Oshiomhole/Iara wedding would be a good season to pressure Dangote into marriage. The ex beauty queen acting on the catastrophic advice of her friend called Ene, went ahead and leaked the fake news of an impending marriage between them. An act that did not go down well with the very conservative Dangote who allegedly warns members of his harem against publicity. The love struck Sylvia even went further by adding Aliko Dangote’s initials to her Instagram page, calling herself Sylvia Nduka AD. 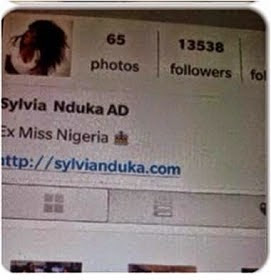 However, she deleted it after news broke about their not-so-secret whirlwind romance and Dangote became angry and would not take her calls.

“She wanted to be Mrs Dangote so bad and she is willing to do anything but this latest stunt has backfired. Dude wont pick her call but she is trying hard and Very soon he will forgive her because they have something special and she lied ti him that she was not behind the leak. The only problem is that she is just a small fish considering the calibre of women who make up the harem. She stands no chance”

You are most definitely not expecting Dangote to release official statement on this are you ?