The Igbo pressure group, the Movement for the Actualisation of the Sovereign State of Biafra (MASSOB), yesterday issued a warning to the president-elect, Muhammadu Buhari, that he has no constitutional power to arrest their leader, Chief Ralph Uwazurike.

The warning was issued in Onitsha, Anam­bra state by the organisation’s regional administrator for Nnewi South Region, Tony Nwodo.

According to Daily Sun, Nwodo said the group has uncovered plans by the incoming government to arrest its leader and he warned that if such a plan is carried out, it would result in the disintegra­tion of the country.

Nwodo said: “Uwazur­uike is our spiritual and physical leader, Buhari cannot arrest him. It is like saying you will arrest the Sultan of Sokoto, who is the religious leader of the muslims.

“He should first arrest Oba Rilwan Akiolu of La­gos State, who is now into partisan politics for vowing that Igbo living in Lagos State should perish in the lagoon if they failed to vote for APC gubernatorial can­didate.

“If Uwazuruike is ar­rested, Nigeria will disintegrate. By virtue of Uwazur­uike’s position, you can’t arrest him. Buhari should focus on how to provide dividends of democracy to Nigerians and not to look for perceived enemies to clamp down upon. We are not in the days of the mili­tary that based its actions on dictatorship,” he said.

Nwodo further stated that the group would continue to struggle for the realisation of Biafra warned that no amount of threats would intimidate the group into abandoning its struggle.

“We are a non-violent group fighting for a sover­eign state of Biafra because Nigerian government has continued to marginalise Igbo nation.

“We will not relent in the struggle and nobody can threaten us, no matter how highly placed,” he added.

In a related development, MASSOB has received an invitation from global body, the United Nations to attend its next meeting in New York in June. 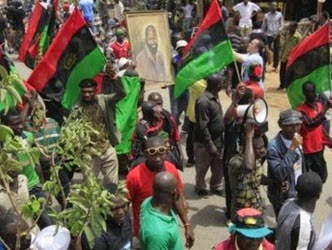