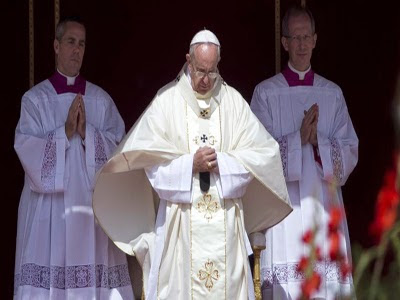 The pontiff urged the faithful to follow the “luminous example” of the two 19th-century sisters and two others, from France and Italy, who were canonised along with them on a sunny spring morning.

Marie Alphonsine Ghattas was born in Jerusalem in 1843, and died there in 1927. She was beatified — the final step before canonisation — in 2009.

Mariam Bawardy was born in Galilee, now in northern Israel, in 1846. She became a nun in France and died in Bethlehem in 1878.

She was beatified by pope John Paul II in 1983.

Around 2,000 pilgrims from the Palestinian territories, Israel and Jordan attended the mass as well as Abbas, who had a private audience with the pope on Saturday.

Giant portraits of the four women hung from the facade of St Peter’s Basilica facing the square.

Although there are several saints who lived in the region during Christianity’s early days, Bawardy and Ghattas are the first to be canonised from Ottoman-era Palestine.

The canonisation of a third Palestinian — a Salesian monk — is still under review by the Church.

Francis urged the faithful to “follow in the footsteps” of the four women whom he called “models of sanctity.”