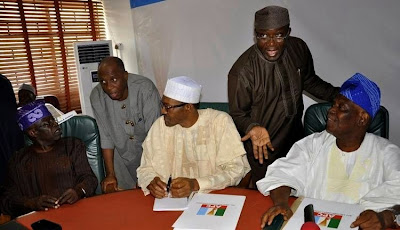 General Muhammadu Buhari has submitted to the security agencies for screening 40 names being considered for ministerial appointments .

According to Daily Post, the names were submitted by the president-elect about a week ago.

The Directorate of Military Intelligence and the National Intelligence Agency are the security agencies screening the potential ministers.

The names listed by the president-elect were mostly former PDP men who had defected to the APC, leading people to question where is the change.

Also on the list are Isaiah Danjuma, the son of General TY Danjuma from Taraba state; Dele Momodu, the publisher of Ovation; Kehinde Lawanson, a former executive director of First Bank; and Chief Bayo Ojo (SAN), former minister of justice.

The rest of the names will be published when security agencies confirm the names to newsmen.

Buhari ran on the platform of change but critics have asked whether working with the old guard even with a new system can guarantee change?

If you agree or disagree with this, leave your comment below.